There were so many kind and generous offers of support immediately after I got ill. The word compassion means ‘to suffer with’ and friends and family really did put themselves out to help me.

My friend Amy became my taxi service, aunts, uncles and cousins came to visit and friends took time off work to accompany me to hospital appointments. My cousin Camilla sent a wonderful book of cross stich patterns to keep me occupied while I lived in solitary confinement and my aunt Lisbeth made my favourite, and very extravagant, cake for my birthday.

Even my friends’ parents offered help: a friend’s mum offered to pay for some of my alternative therapies and I was invited to stay with another friend’s parents’ in Birmingham so that they could look after me. 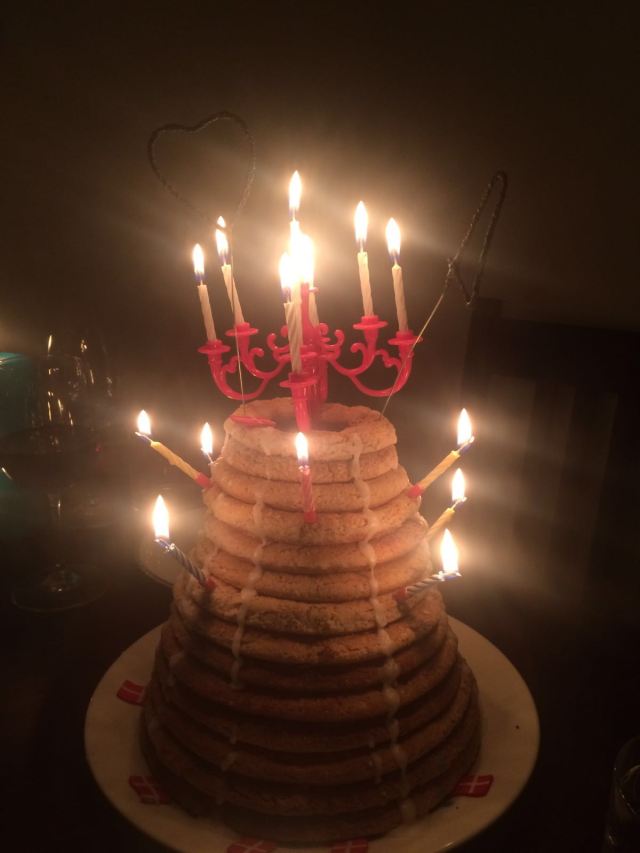 The Danish Kransekage birthday cake made by my aunt (my family has Danish roots). Two friends came around for dinner, any more would have been too noisy, so there was plenty of cake to go round. Yum yum.

The sudden nature of my illness has made me realise how alone and exposed the modern world has made us.

House prices, the labour market and school catchment areas mean we often live in different cities from our friends, family and jobs. This might work perfectly well when everything is okay but, when the wheels come off, we’re left stranded.

I live in the part of North London where I grew up but over the years nearly everyone has moved away. Just two friends, Amy and Nikki, remain in my immediate area. Normally this isn’t a problem as most of my family are only an hour away and, like most Londoners, I usually meet friends in central London.

But it was a huge problem when illness struck. People couldn’t pop in to check I was okay and do odd jobs like go shopping, wash up and change my bedding (it’s impossible with vertigo).

Amy and Nikki were amazing but the help of more than two people was needed. I could have asked my neighbours but, at the height of vulnerability, I only felt comfortable with my nearest and dearest. Besides, my next door neighbour is a drug addict and there’s no way she’s coming into my home.

By the end of April my car had been idle for three months and it resembled an abandoned vehicle. Cobwebs and moss grew on it, bird shit covered the windscreen and the battery was so dead that the key fob wouldn’t even open the car doors.

After much procrastination I eventually went to look at the car. As I cluelessly peered under the bonnet, a man beckoned me over to his car. He was wearing a Council uniform and my immediate thought was that he was from the abandoned vehicle unit.

But he was an angel sent from heaven to help me.

It turned out he works for the same local authority as me and it gave me the confidence to trust this perfect stranger.

Once the battery was charged he told me that the car would need to be driven for at least an hour to fully recharge the battery.

Panic set over me. Was I ready to actually drive? I’d hardly walked in three months and the slightest movement of my head caused an extremely disorientating deadly crashing sound in my skull. Doctors said that I could drive but would the vertigo return? Would I crash the car and kill someone?

He could tell I was nervous and he offered to sit in the passenger seat as I went round the block. We ended up having a mini road trip together, driving around North London for over an hour, talking rubbish and generally having fun.

He gave up so much of his time and he was the perfect gentlemen. Later I told this story to our Chief Executive and he was shortlisted for an Employee of the Year award.

The modern world can be so isolating but, in showing his humanity, this amazing stranger restored my faith in the world and made me feel part of a wider community. After being so isolated it was a very welcome feeling.

I’ve learnt that when people are ill and isolated these seemingly small acts of kindness become disproportionately important. They make you feel loved and missed and this helps pull you back from the abyss of despair and loneliness.

I now make more effort with my neighbours, many of whom are elderly and isolated, and next time a loved one becomes ill, my compassion will extend to similar acts of kindness as I know the difference they make.

2 thoughts on “Acts of kindness”